We’ve been back home a week but my brain hasn’t quite assimilated that we’ve left Sierra Leone.

Since touching down at Heathrow I’ve felt like a rabbit in the headlights. Or, at least, one dazzled by the neon glow from the logistics warehouses at the back of Terminal 4, which seemed impossibly modern after the equivalent sights at Lungi.

I’ve spent most of the week hiding indoors, much as I did during my first seven days in Freetown. More than a sort of reverse culture shock, however, it’s a common cold that’s kept me confined to quarters.

It made for a low-key end to a tumultuous year. But 2017 got off to a great start when I discovered this website had been shortlisted in the Travel section of the UK Blog Awards.

That’s thanks to readers who took the time to take part in the public vote. I’m particularly grateful because it’s further justification for our decision to move to Sierra Leone.

While it was a career opportunity for The One With The Common Sense that took us to Africa, the chance to focus on my children’s writing sold the move to me.

It paid off, giving me time I’d otherwise never have had to (almost) complete a second draft of a novel. However, I never envisaged how important the blog would become to me, not only as a record of our experiences but also – I hope – as a useful source of information I wished we’d been armed with before we came.

Hampered by slow/broken internet connections, I ended up spending nearly as much time sorting out this blog as I did on my other writing. That wasn’t quite what I’d intended but I was spurred on by positive feedback.

It’d be nice to think that Home Salone could form the basis of a book. Realistically though, the story of a complete unknown, his wife and daughter, bumbling through nine months in Sierra Leone is probably too niche for most publishers.

So it’s great to have some recognition for the blog in its own right, courtesy of the UK Blog Awards.

Despite its shortlisting category, it was never intended as a conventional travel blog. Rather than offering hotel or excursion reviews, budget tips and city guides, I’ve aimed to convey the reality of everyday life through our experiences as expats and tourists.

An element of journalism, I hope, provides a deeper understanding of the country.

Nevertheless, I hope it has encouraged people to at least consider visiting Sierra Leone. It’s neither cheap nor easy to reach and it’s a difficult place to travel, no matter how much you’re willing to spend; even negotiating the airport is a minefield.

But it has undoubted beauty. Upcountry, in places such as Tiwai Island or Mount Bintumani, its natural wonders are about as unspoiled as anything you can hope to see.

Even Sweet Salone’s most popular destination – the stunning River Number Two Beach – can be your exclusive playground if you visit on a midweek morning.

For me, however, Sierra Leone’s biggest pull is that it’s guaranteed to fascinate. Even after nine months, I found new things to gawp at while walking or driving along the streets.

I never tired of seeing hawkers balancing enormous baskets of goods on their heads, builders handballing basins of cement up wooden scaffolding or moto-taxis zooming between pedestrians resplendent in African-print dress and cars held together by sticky-backed plastic.

If you need convincing, ask anyone who’s visited. Chances are, they’ll tell you how much they loved the experience – and how it has stayed with them. It’ll certainly leave a greater impression than a fortnight on the beach.

Part of that, sadly, is seeing the poverty. You don’t need to tour a slum to get the idea; just look out of a cab window.

That can be an uncomfortable experience but it’ll give you a greater understanding of the world and might even offer a helpful change of perspective about aspects of life back home.

Visiting to take part in a fundraising event – such as the Sierra Leone Marathon organised by the charity Street Child – is a great way of both seeing the country and helping to alleviate some of its problems. 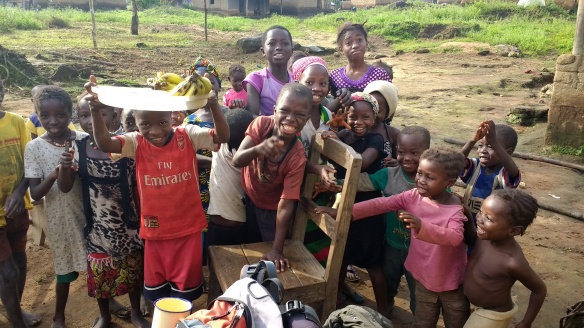 Few experiences are as moving as seeing first-hand the hardship of life in a rural community, and being greeted with friendly waves by adults and with wide-eyed fascination by playful children.

If you can afford them, agencies like Visit Sierra Leone and Overlanding West Africa offer package tours which take most of the hassle out of your trip.

But it’s hard to imagine a holiday in Salone totally free of hiccups. In fact, it’s arguably the glitches that make the experience.

You might not enjoy them as they’re unfolding – when your car breaks down in the middle of nowhere, or a blackout leaves you fumbling, naked in the shower, with a head lathered in shampoo.

But most problems are dealt with more easily than you’d think. And the chances are these will be the times you remember, and you tell your mates about in the pub afterwards.

Or as The One With the Common Sense would say – through gritted teeth – on a weekly basis: “Never mind. It’s all good material for the blog.”

4 thoughts on “Ending on a high”