Our life in Sierra Leone has got a fair bit more comfortable since I last posted.

That’s thanks in no small part to the fact our own generator is no longer a seemingly unobtainable dream but is instead parked out back.

It’s arrival wasn’t entirely straightforward. We knew that – being much more powerful than our temporary machine – it’d be quite a bit bigger.

But when a large flatbed truck carrying a crane – of the type used to pick up abandoned vans – tried to pull onto our driveway – we were more than a little alarmed.

The generator on the back looked like it could supply a medium-sized office. (I’ve since noticed it’s twice the size of the one powering all the fridges, freezers and air con units at the local supermarket.)

There was a heart-stopping moment when it looked like the lorry had become wedged and would bring down a wall in a bid to free itself but in the end it deposited the generator on the drive.

That left the small matter of getting it round the back, for which our mechanic – Mustafa – had rounded up a posse of hired hands to hump it manfully on a few metal rollers.

As I watched the process begin through the front window, it felt like a seminal moment; a test, if you like. Was I prepared to play the rich white man, looking on as a dozen Africans sweated in the sun?

So it was that team of powerful and handsome young black men was joined by one pale and bespectacled thirtysomething with Olive Oyl biceps to shove, shunt and grunt for three hours to shift our metal cargo the 30 metres to our back yard.

The process involved much debate about how best to shift the rollers or negotiate bumps, but – shouted in the local Krio dialect – it was unintelligible to me. I knew better than to get my fingers or toes in the way, so stood back until I heard “okay, lo go” – seemingly the command to push.

I’m not sure how much my efforts contributed to the process but I’m pretty sure it gave the rest of them a laugh. And when all was done it somehow seemed wrong to say “ta-ra, lads” and slink back into my relatively luxurious pad.

I wasn’t paying them – that was up to Mustafa – but I doubt they were getting that much and I’d never have hit an appropriate figure for a cash tip. But, as fortune (or good planning) would have it, I’d bought a carton of beer earlier that day, so felt the least I could do was hand out a tin each.

I feared this might seem a pitiful offering after such hard graft but eager grins proved I needn’t have worried. I saw one or two of the lads later that day and their thumbs-ups suggested I’d made a little progress in terms of joining the community.

I’ve since accepted an invitation from one of them to go running, which might be a little foolhardy given the age difference, but it was nice to be asked.

The generator’s arrival marked our first success in one of three key battles we’ll have to win before we truly feel settled.

We’re still awaiting the arrival of 0.77 cubic metres of belongings – towels and toys, pots and plates, milk (formula) and medicaments – we had shipped. Most important are the Flump’s car seat and travel cot.

The arrival of the latter should hopefully mean mummy and daddy no longer have to sleep on a narrow sliver of mattress, either side of Flumpo draped across the pillows, or endure being woken at 4am with a cheery face-slap.

We’ve been expecting the freight “tomorrow” for about three weeks but it was initially held hostage by the shipping company who demanded our “commercial invoice”. Despite our repeated complaints that it contained only personal effects, it was nearly a fortnight before they relented.

Even then, we had to pay probably the total value of the contents in various fees to have it released as far as Customs. They’ve had it nearly a week, having first threatened to force us to attend an inspection before opting instead to “scan” the six boxes.

However, it seems their equipment is on the blink, and so our possessions remain at the port. I hope there are no remnants of anything too explosive in those reusable nappies we packed.

Until that consignment finally arrives at our house, we’ll be relying on the one shop-bought pan to cook and to boil water. That is, of course, essential for the one thing guaranteed to keep us sane: tea. We’ve no cups, so are having to drink out of the Flump’s “cauldron” – a food flask usually used to keep her packed lunch warm. 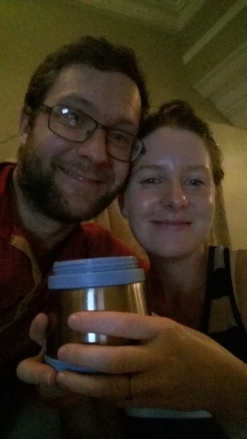 If we can’t be bothered washing up, then we can always resort to the local brew. Star beer is renowned for never quite tasting the same twice. Indeed, as the above picture shows, the abv isn’t always uniform. So long as it’s cold, it’s fine enough for me (even if the occasional bottle carries a dubious hint of Sarson’s).

The third mountain we have to climb is to buy a car. That’s also a work in progress. The deposit’s paid but we await the full bank transfer to arrive before we can drive it home.

So the last week involved more bouncing around in the back of Mr Sowa’s cab for myself and The Flump.

The driver’s appearances were a welcome relief during 10 long weekdays at home with a child who had just three books, a couple of cuddly toys and a little artist set to keep her entertained. (I confiscated plasticine and crayons on account of her repeatedly eating them.)

Sweating it out until the driver’s here

We coped well enough for a day or two but soon bored of each other’s unreasonable demands and pathetic tantrums (the latter often provoked by the Flump’s insistence on donning shoes and heading outside to play por-baw [football] at the hottest point of the day).

There was only one answer: Family Kingdom. Less a theme park and more an ageing playground, it’s nonetheless got plenty to entertain a little one and – more importantly – has what seems to be Freetown’s only public pool. Just the thing for cooling tempers.

All went well until I asked about the changing room which, it turned out, was more like a janitor’s closet. I duly bolted the door to this tiny room while I tried to change the Flump’s nappy and slip into my swimshorts without causing an avalanche of yard brushes and mops.

Only when ready to leave did I notice the absence of a door handle on the inside. I tried every combination of force and torsion on the bare lock barrel but it wasn’t budging.

Unless I wanted to spend the evening surrounded by cleaning products, assorted inflatables and – oddly – an electronic dartboard, I was going to have to take leave of my dignity and holler for help.

Thankfully, the pool’s barman heard and rescued our afternoon, if not my pride.

In other news: The One With The Common Sense received something of an indecent proposal the other day, when our caretaker expressed his desire to work in Britain. After first asking her to get her employer to apply for a UK visa on his behalf, he then suggested she find a friend who would be willing to marry him. So, if you’re in the market for a thick-set, bald and bearded, middle-aged black man who speaks little English with whom to undergo an illegal sham marriage, do let us know.

If it helps sweeten the deal, he regularly attends Friday prayers, is handy around the house, can source a cheap imported car and will pay for your flights to Freetown to ensure you have the necessary photographs with which to dupe immigration officials.

2 thoughts on “Winning over the locals?”