The floodlit astroturf of Wusum Field at 5.30am felt a million miles from the “race village” of any marathon back home.

There wasn’t a Portaloo in sight at the start of the Sierra Leone Marathon, let alone merchandise stalls, masseurs’ tents, coffee vans or snack bars.

But it’s fair to say the warm-up DJ could teach his rivals back home a thing or two. His mix of Afrobeats and Western hip-hop made a refreshing change to the tired old setlists of predictable staples.

It was the prelude to a special race, one unlike any I’ve run before.

The drive across, on single-lane highways lined with towering palm trees, had been fairly straightforward despite a lengthy torrential downpour that reduced traffic to a crawl in places. The atmosphere inside the car was just as stormy, as an overtired Flump whinged and demanded crackers practically the whole way.

Makeni is home to the British charity Street Child, which organises the marathon, and which really feels a part of life in the town.

We spent part of Saturday exploring one of its bases, from where it works to provide shelter, education and a brighter future to children driven onto the streets after being orphaned, victims of domestic abuse, or driven to work by poverty and hunger.

The charity’s social workers spoke powerfully about how these children end up being forgotten, ignored, stripped of their rights and criminalized.

It’s easy to see how. It’s uncomfortable to be approached by hungry children, dressed in dirty rags, as you sit in a nice car on the way to a restaurant.

Wracked with guilt, you might give them some food if you’ve some to hand. Money? Maybe. But then you worry that it won’t go to the kids at all. And somehow that just feels wrong; there are others just as needy who don’t beg.

If they’re selling something, you might buy it. But does that just trap them in a vicious circle of life on the streets?

I give to charity: they weigh up all these difficult questions and choose a considered path. But you can never be sure your donation does what you want it to.

And it doesn’t solve the immediate problems of that bright-eyed, beautiful and dirt poor boy knocking on your car window and pointing to his stomach.

Often, a sad smile and a shake of the head are all I offer. It never makes me feel good.

So I’m glad social workers from charities like Street Child are taking the time to sit and listen to these kids, to talk about their problems, and to consider how their lives might be improved.

Last year, Street Child claimed to have supported 13,000 Ebola orphans in Sierra Leone and neighbouring Liberia, handed out 4,400 business grants to families of former street kids, and built or repaired some 141 schools.

Whether its work is as effective as its PR I don’t know but as I ran through the villages around Makeni, it certainly felt like its efforts were appreciated.

Some 118 Brits had flown over to run either the marathon, half-marathon, 10k or 5k races, raising in the region of £130,000 for the charity’s Girls Speak Out campaign, which aims to keep 20,000 vulnerable children in school, off the streets and away from sex work.

I wasn’t up to the full 26.2 miles this year and, as ever when others are running marathons and I’m not, I felt like I was missing out.

Kids had great fun cheering on the runners

Those who’d flown over for the full package had visited rural schools and been on urban night walks to see Street Child’s work up close. They were certainly plunged head-first into life here – practically everyone’s vehicle broke down and some endured two-and-a-half hour waits for airport transfers when the buses failed to show.

But all those I spoke to were touched by this snapshot Salonean life, even before the race got under way.

There was little fanfare as the starter sent us picking our way along a bumpy dirt road in the dark. I’m well used to this sort of terrain but his advice not to go off too quickly proved sage when within 100 metres the field ran into a overturned motorbike smack in the middle of the route.

The streets were quiet as we wound out of town. Without the distraction of a cheering crowd, I could enjoy squadrons of cattle egrets flying overhead and the rhythmical rasping of frogs hidden in a small wetland.

After passing the skeletons of a couple of crashed cars, picked as clean of useful parts as if the hooded vultures had developed a taste for metal, we were soon off onto country tracks.

And that, for me, was when the magic began. Despite the hour, villagers had come out en masse to sit on the porches of their single-storey homes.

Many shouted “thank you” – testament, perhaps, to the positive effect of Street Child’s work on Makeni.

Kids yelled “amporto” – the Temne phrase for “white man” – the length of the route.

Unlike the equivalents dreamed up by Westerners for black people, it was delivered with warmth, smiling eyes and, admittedly, a degree of amusement. This bordered on hilarity on receipt of a high-five.

Knowing I wasn’t in any condition to be chasing a decent time, I did all the things I’m normally too grumpy to do during races. I chatted to spectators, thanked them for their support, slapped palms and stopped to take photos.

At one point I drew alongside a struggling fellow runner, a Sierra Leonean, offering him a pat on the back. Africans are proud of their strength; he said a brief thanks and powered ahead. As he disappeared ahead, I noticed he was running in jelly sandals.

Where normally I suffer a crisis of confidence at one-third distance, I was so engrossed in the experience that my legs barely noticed the first seven miles tick past.

Mist descended as we headed into beautifully lush countryside, unseen wildlife singing at full volume, and I feared we might be in for a dousing.

But it remained dry and – though I was still soaked in sweat – mercifully cool-ish.

Then, as the legs started to tire 10 miles in, yet more kids gave us a raucous reception singing “amporto, amporto” as we passed. A couple of young lads asked for my water bottle, but I saved it as a “prize” for one little girl who ran alongside me for the length of her village.

This young runner was pleased with the gift, if unimpressed by my camerawork

I’d not run the full distance in training and was tiring as the route took us back towards town. And I don’t mind admitting to a certain amount of relief when the stadium approached and my watch told me the route had been measured a good mile short.

Anywhere else this would be unforgiveable. A few weeks ago, I was furious – and heartbroken – to find out that my sub-3:30 marathon PB I’d worked so hard for would not stand because the Greater Manchester course had been measured short.

But as ultra runner Susie Chan put it in her blog: “Things that matter normally to runners simply do not matter here… it’s not about pace, time or placings… it’s not about you… every step of the race is for the people of Sierra Leone… for the projects and schoools you have visited.”

The medal, on a cord adorned with beads in the blue, white and green of Sierra Leone’s flag, was carved of wood. And possibly my favourite yet.

I wasn’t the only one who loved the medal

Unfortunately, the One With The Common Sense had been unable to get to the stadium – motorbikes are the only taxis round here and she didn’t fancy flinging the Flump over the pillion seat.

So it was nice to bump into Choe, a young schoolboy who’d kept the Flump amused when we met the previous day. He’d run the 5k.

I nearly always have an inner glow after a long race but, as I wandered back to the car, I reflected on something really special.

And I promised myself that – fitness allowing – I’d be back to do the full distance next year. 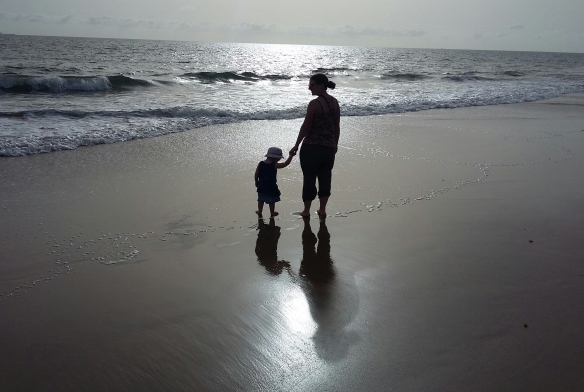