It’s been a week that’s highlighted some sad realities about life in Sierra Leone.

Firstly, we heard two vehicles had been stolen during a break-in at the One With The Common Sense’s office.

Worse, however, was finding out later that one of the night watchmen had been killed in the robbery. Men armed with machetes – or cutlasses, as they call them here – had tied him up and strangled him.

Details are sketchy as to why they went to such an extreme but the incident has shocked the NGO community. Petty theft is apparently commonplace here but violent crimes are said to be few and far between and this has been unheard of in the sector.

Although The One With The Common Sense didn’t know the victim, I’d be lying if I said the incident didn’t shake me up, make me wonder whether we were targets and about the safety of our house.

For a day or two, I found myself looking at everyone with fresh eyes. Could those seemingly friendly guys up the street actually be a threat?

Then I thought back to a court case I’d covered as a reporter, in which a security guard had been kicked to death. The forensic evidence was some of the most harrowing I’ve heard. It happened in Hull, a relatively peaceful city in the relatively peaceful United Kingdom.

Horrible stuff happens every day at home, not least in London which had been our home for eight years. I wasn’t paralysed by fear there and we shouldn’t be here either.

Nevertheless, there are concerns about increasing violence among Salonean youths, driven by an unemployment rate approaching 70% among 15 to 35-year-olds. That’s a serious concern even before you realise a third of the population falls into that age bracket.

For now Sierra Leone remains a largely peaceful country. We’ll be on our guard but have to keep things in perspective. Murders are still few and far between – fewer than two per 100,000 people in 2012. That’s about twice the UK rate but low by global standards.

Sadly, we were to come face-to-face with an altogether more commonplace problem when we headed to the beach on Sunday.

When we greeted Kelly, one of the workers at our favourite beach bar in Lakka, I did wonder that his beaming smile was turned down a notch.

He went through the usual pleasantries before revealing: “I lost my baby six weeks ago.”

I didn’t know what to say.

He’d brought his daughter, Joy, to meet us one time, when she was about eight or nine months old. Though small, she appeared reasonably robust. It seems impossible for a child like that to be here one day and gone the next.

Sadly, of course, it’s not. Of every 100 babies born in Sierra Leone, eight or nine die before their first birthday, while between 12 and 19 don’t make it to the age of five, depending on which estimate you prefer.

Children aged under five are entitled to free healthcare but coverage is patchy [pic: H6/Flickr]

Kelly betrayed little emotion when he told us. Losing children must be a sad fact of life for many here in the way it was for our grandparents, or great-grandparents.

His English isn’t great and he struggles with my accent so I couldn’t quite work out what had caused little Joy’s death, other than that she hadn’t been ill long.

He’s a poor man. I don’t know what he earns for showing people where to park, leading them to the tables and serving up drinks, but it won’t be much. Doubtless he couldn’t afford private healthcare, whether it would have helped or not.

Healthcare for under fives is supposed to be free here but in many places the prescribed drugs aren’t available, while in others staff reportedly demand fees for medicines that ought to be free.

Doctors here have told us about nurses charging for services that are supposed to be free. Shocking, right? Perhaps less so when you hear that some staff are forced to “volunteer” as trainees for up to three years before they earn a salary.

Just another of Sierra Leone’s problems that will take a long, long time to sort out.

This week also brought our first major blackout since arriving back from our summer break. The rainy season generally ensures a plentiful supply of hydro-electric power to Freetown and we’d not had cause to fire up the generator in three weeks.

But in the early hours of Monday, prodigious rainfall caused flooding in several areas. It was a minor convenience for us, waking the Flump who clambered into our bed in tears and leaving us mopping up puddles of rainwater that had seeped through the cracks in the sliding windows.

It coincided with our generator fuel pump being taken for repairs, leaving us operating by candlelight. 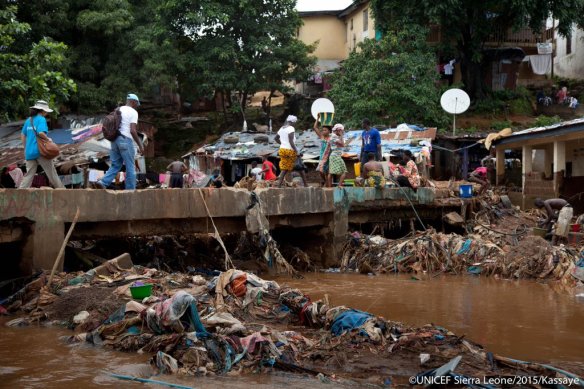 Rubbish clogging the water at Kroo Bay, as captured by Unicef workers who went to the aid of last year’s flood victims

But spare a thought for those in Kroo Bay. That’s the city’s biggest shanty town, on the edge of the city centre, where about 6,000 people live on top of each other in little more than tin shacks.

Almost all of them were flooded out, while at least four people were killed.

As the water races downhill, passing homes like ours, it collects rocks, foliage from the rain-battered trees and assorted refuse, before ending up in rivers and creeks. The banks of those watercourses are invariably lined with makeshift homes.

Flooding is inevitable. The latest incident occured a year to the day that hundreds of slumdwellers were rendered homeless, prompting BBC Correspondent Umaru Fofana to call the scenes a “a scar on the conscience of the country’s leaders”.

Last year, Kroo Bay’s community leader used an interview with Awoko newspaper to point the finger at those living in Freetown’s hilltop districts – that’s people like us.

“They cause the floods in our community. It is their filth and rubbish that settles down here and blocks the free passage of water,” Chief Pa Alimony Kargbo Kabempa I said.

His beef was that people routinely tossed litter into roadside gutters and culverts without a second thought. And it was a valid point. It’s been my main bone of contention since I got here.

Practically everywhere you corner turn in Freetown offers up a photo opportunity; a magnificent mountain, a stunning sea view or a fascinating snapshot of life. But tilt the camera downwards and you’ll invariably focus on discarded drinks containers, plastic bags or purified water sacs.

Lumley Beach, a two-mile stretch of sand that should be the envy of capital cities the world over, is awash with plastic packaging, hypodermic syringes, car parts and bits of broken tech.

I’d never knowingly chuck litter in the street but that doesn’t necessarily make me any better. Sure, I’ve spent six months carefully bagging up our household waste and leaving it out back for the watchmen to deal with, but I had no idea where it would end up.

At first, I naively assumed a big truck would come and collect the stuff. But when I started to probe a little further, I was given some vague response about being “taken to the tip”. Only one afternoon, when an acrid smoke came through our windows, did I twig. A heap of rubbish – tins, jars and all – was being burned in the property over our back wall.

We’ve finally got around to arranging a weekly wheelie bin collection with the company contracted to deal with the city’s municipal waste. But it comes at a price equivalent to a quarter of the average salary.

Now our stuff is taken to a proper tip, bordering another of the city’s slums, where first pigs and then impoverished humans filter out anything of value before it’s set alight.

I still dutifully wash out the baked bean tins and set aside the jars for recycling, before remembering there’s no point and tipping the lot into the bin.

It’s well and good for me to get annoyed about the thoughtless attitude of people who toss rubbish from a car window but if there’s no affordable means of getting rid of it properly, what else can you expect?

Where there’s muck, there’s brass, the saying goes. And I find it hard to believe there isn’t a private firm out there willing and able to make a few quid by sorting it all out – helped by some of the many millions in aid money spent here, if necessary. At least it would create much-needed low-skilled jobs for the many unemployed here whose education was ruined by war and Ebola.

No doubt others better qualified than me are wrestling with the same problem.

Strides are being made in Sierra Leone in roadbuilding, while power distribution appears to be improving.

But, as I watched restaurant workers painstakingly rake up rubbish then bury it in the sand in front of our table at Lakka beach on Sunday, it struck that things are unlikely to get a great deal better until those in power get the basics right.