A year ago last week, Sierra Leone was finally declared free of Ebola.

Its people had endured what would almost certainly have been the most terrifying, paranoia-stricken 18 months of their lives had many of them not already survived a vicious civil war.

Reminders of the virus’s insidious spread are everywhere, from defiant slogans painted on walls to notices in bathrooms reminding you to wash your hands.

Yet for all that, in the seven months or so we’ve been here, it’s rarely cropped up in conversation outside the One With Common Sense’s work.

It’s not like Freetown didn’t suffer. I remember how – just after we’d told my mum we were thinking of moving here – we wandered through the World Press Photo competition at the South Bank Centre and came face-to-face with poster sized shots of gravediggers in enormous cemeteries.

Those who avoided infection lived through curfews, bans on public gatherings, the closure of schools and universities, and loss of work. My Evertonian friend, Amjata, recalls people’s anguish at being unable to enjoy their favourite pastime of watching football in cinemas.

Yet hardly anyone has mentioned that harrowing time to me.

I don’t think that’s because they don’t want to talk about grief – people often talk about family deaths. More likely there’s just a matter-of-fact acceptance of loss here in a way there isn’t at home. People are just more accustomed to dealing with untimely death.

I simply can’t imagine how it must have felt to worry that – by shaking hands with a friend – you could be exposing yourself to danger.

I’ve spoken to a few Ebola survivors but one, lab scientist Bobson Mansaray whose job involved testing samples for the disease, summed up the fear he felt after a close colleague died from Ebola.

“We had worked so closely together, I just thought I must be positive. I was so scared, I felt sick. I can’t forget that day,” he said. His hunch was correct – he did test positive – but lived to tell the tale. I’m not sure I’ve ever seen someone look so haunted as he did when he related it to me.

So, just how brave would you have to be to put yourself forward to handle the decomposing corpses of those suspected of having the disease?

Recently, I interviewed several people who donned protective suits to bury bodies, drive ambulances or rid them of the blood and vomit of highly infectious victims.

In the publicity material I wrote for a Catholic aid charity CAFOD – published by the Guardian – I described these builders, teachers and bus drivers as the “everyday heroes” of the battle against Ebola.

Yet they often met fierce opposition from villagers in the remote areas around their base in the northern town of Kambia. In a bid to stop the spread of the virus, the government had banned people from performing the traditional rites of washing and dressing bodies – whether they were suspected Ebola cases or otherwise.

Only burial teams – in their alien-looking protective suits – were allowed to touch and bury bodies. And angry relatives took out their frustration on burial teams, stoning vehicles and hounding them out of villages.

The treatment from friends and relatives was almost worse, with many forced out of their homes.

Poda-poda bus driver John Nile Kamara said of his reunion with friends and family after working six months solid to transport burial team: “They were frightened of me. Sometimes they would say ‘don’t come near me, you’ll kill me’.”

He was eventually reconciled with those close to him. I’m told others face continued ostracisation.

Despite the opposition, those who served on the burial teams universally spoke of a “duty” to serve their country and its people.

Momoh Katta is glad to be back on a building site

Stonemason Momoh Katta, who disinfected ambulances, told me: “Even my mum didn’t want me to do this job. I said ‘if God wants to take me, then let me die but I’m going to do this’. I just thought this was something I had to do for my nation.”

From afar, it’s easy to wonder why people were not already taking the basic steps – such as regularly washing hands – that can act as a defence against the deadly virus.

But it’s easy to forget the context. If you’ve never had running water supplies, you can’t routinely wash your hands. If you’ve lost 14 years of development to – and been set back even further by – civil war, then you’re bound to be playing catch-up on providing those water supplies.

Visiting Kalia, in the south-east, with work left an impression on The One With Common Sense. The village had been particularly badly affected by Ebola because of a lack of water and sanitation facilities.

“Imagine having to traipse off into the woods in the middle of the night with a young child,” she says.

And it’s not just about water. Years of education were lost to civil war. Teachers and teacher training expertise were lost with them, the governance systems were ruined by them. A huge number of people here are sitting their school leavers exams in their 20s.

So it was encouraging to hear science teacher Alex Musa Koroma tell me: “As a science teacher it was very satisfying to see people come to understand why the restrictions were in place and it’s an ongoing process. Hand washing is a routine in school.” 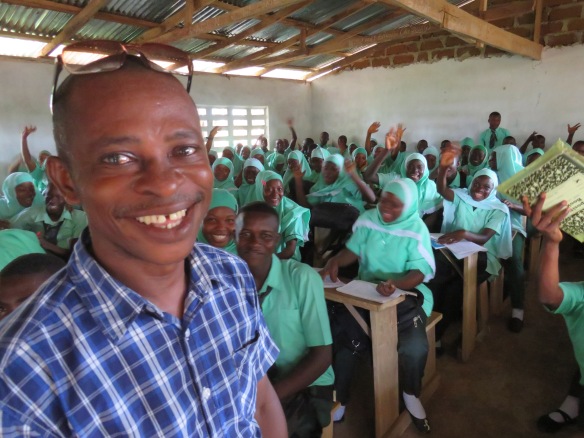 Alex is one of a number of people for whom the Ebola outbreak proved beneficial, in the way that many Britons – particularly women – were said to have “had a good war” from 1939-45.

While Brits found themselves revelling in unexpected places, jobs and situations, the financial rewards for Sierra Leone’s burial team workers have given many fresh hope for the future. In Alex’s case, he’s building a home for his family.

He’s not alone. Several of those I spoke to were building new houses, freeing them from the yoke of rental accommodation and better securing their children’s future.

The job paid around four times the £60-odd-a-month minimum wage that’s the limit for so many people here.

An English friend, who coordinated part of Freetown’s Ebola response while heavily pregnant, told me people in the capital were begging for burial work.

Even so, some of those who were given work feel forgotten now the outbreak is a not-so-distant memory.

Many are receiving counselling to help them deal with the things they saw and experienced. But not all.

And they argue that while funding has been made available for those who contracted Ebola and survived – particularly children – they are being left out. Some say the teams, with their expertise built up over 18 months – should not have been disbanded in case there’s another outbreak (of any disease) or natural disaster.

Tremendous sums are still being poured in to Sierra Leone – £213m in UK Aid in 2015 alone – and much is concentrated on Ebola survivors.

But a few months back I spoke to women in the busy town of Waterloo, 40 minutes outside Freetown, who were struggling to get by after taking in children of dead relatives.

So while the social scars left by Ebola might not be obviously visible, they run deep.

One silver lining of the outbreak, however, might just be that hundreds of young people are motivated to prevent any repeat.

Burial team member Fatmata Kamara is ploughing her salary into a degree in public health studies. “After the Ebola outbreak ended, I realised there are few specialist public health officers in Sierra Leone. We’ll need people with particular skills and knowledge in case of another outbreak. That’s why I’m preparing myself.”

In Kalia, villagers are making use of a well and three new sets of communal toilets built by CAFOD’s partners to both provide dignity and a first line of defence against Ebola’s return.

And the indications are that the awareness that teacher Alex Koroma talked about in schools is embedded from an early age.

One eight-year-old Ebola surivor, Fatmatu Jalloh, told me: “My mother is a nurse and I love Personal Health Education. I want to be a teacher when I’m older.”