It’s been more than three months and we’ve been away from Sierra Leone for long enough to have started missing it.

Every so often, when we pause for breath from our busy “normal” lives, we find ourselves missing the colour, the chaos and sheer fascination of life in Freetown.

And we felt that more keenly than ever during our journey to London to attend last Friday’s UK Blog Awards finals. As usual, we were running late and hadn’t found time to eat either side of dropping the Flump with my sister-in-law.

With our train still 30 minutes outside the capital, the One With the Common Sense remarked: “This is where you miss being able to yell out of the window for a bag of popcorn or plantain chips.”

As it was, we had to wait until Paddington to pay over-the-odds for an egg and cress butty to wolf down on the Tube. We were already tetchy with hunger, so you can imagine my reaction on arriving at the venue to find the bar had closed.

The awards presentation was about to begin so they were ushering everyone through to the main hall. I sat in the back row, arms crossed, in a childish huff. However, it wasn’t long before I cheered up… I was soon able to sneak back to the bar to fetch a pint, the staff then began working the room with free booze and, shortly afterwards, we had some good news… 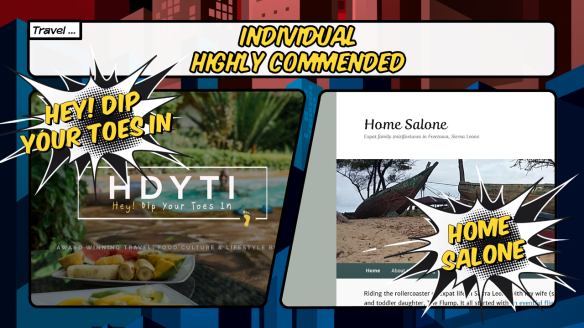 Home Salone – or “Home Saloon” as it was splendidly mispronounced by host Chessie King – was one of two blogs highly commended by the judges from the field of eight finalists.

Also highly commended was my favourite of the shortlisted individual travel blogs, Hey! Dip Your Toes In, which mixes travel, culture and cuisine in a slickly produced package. It made it a good night for West Africa, because one half of the husband and wife team behind HDYTI, Omo Osagiede, was brought up in Lagos.

Their posts exploring Nigeria and its historical connections with that other Lagos, in Portugal, were among my favourites. A worthy winner on the night, however, was Karen Edwards – aka Travel Mad Mum – whose remarkable story of backpacking with a 10-week-old daughter has made national headlines.

I was delighted to get a spot on the podium, so to speak. It was all I was realistically hoping for and it made the time-consuming process of continually improving the appearance and promotion of the blog worthwhile.

This process also made me think about offering something more useful than the glorified What I did on my holidays that I’d set out to write.

Despite Freetown having a sizable expat community, we’d found a dearth of information for people moving there outside the excellent Bradt guidebook’s run down of facilities and travel highlights. And guidebooks don’t tend to be aimed at people with toddlers in tow.

So I set about shedding a little more light on expat life in Freetown. And readership patterns suggest it’s proven useful to at least a few people, with  many logging on from far-flung places around the globe.

One week someone in Bhutan ploughed through 15 pages in one go.

Hopefully the blog will remain a useful resource for those flying to Sierra Leone for a little while to come.

But my primary motive for entering the awards was always the hope that some form of recognition would help me achieve an ambition to become a published author.

While I spent most of my time in Sierra Leone working on a children’s novel, I’d always had one eye on the possibility of writing a travel memoir. 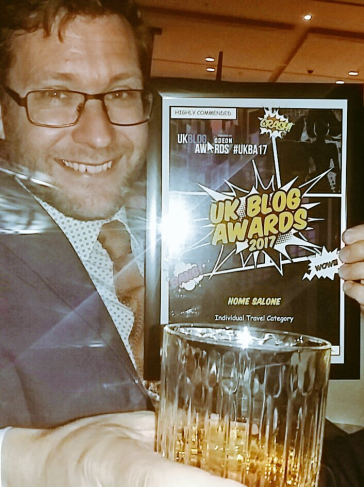 Here’s to you and your encouragement

I’m under no illusions. Unless you’re Ewan McGregor, Dame Ellen MacArthur or, erm, Ben Fogle, there’s no money in travel books. Most bookshop displays are limited, at best, all but a few publishers aren’t interested and so it follows that agents feel the same.

Books about Africa are also a tough sell, so it’s fair to say I’ll be swimming upstream. But I might as well give it a crack. As one agent told me, I can always publish it myself.

So, I’ve started work on it but don’t hold your breath. It’s a fiendishly complicated business, not a simple case of just refreshing a few blog posts. Setting a personal adventure into the context of your life and drawing meaningful conclusions requires a good deal of introspection, and that’s before you’ve wrestled with the tricky narrative structure.

The task isn’t made easier by the fact I’m still ploughing through that children’s novel, which at least feels as though it’s continually improving thanks to the input and advice of my new SCBWI critique group. Oh, and I’m now back working for a living, with the chaotically busy task of setting up a website and print publication to support the 2018 International Business Festival.

But I figured that if anything would compel me to get to the end, it’d be publicly declaring what I’m doing. So here you go. I’m really grateful for the kind words of support, and the votes that helped me get on the awards shortlist in the first place. They still spur me on to keep writing.

Next, however, I’ll be expecting you all to buy at least one copy each.

Before then, we’ll be maintaining our links with Sierra Leone. The One With The Common Sense will be back in Freetown with her new employer next week.

And she’ll be taking with her some football kits donated by Everton In The Community to the club’s namesake Everton Sierra Leone. I’ll hope to update this site with news of that community initiative – run by my friend Amjata – if ever I get a moment between all the other writing.

9 thoughts on “To be continued?”