Home is where the heart is, according to proverb. But if that’s the case, mine has been riven in two for years.

I’ve spent my adulthood away from Liverpool, travelling “home” to family, friends and football at weekends, then heading back “home” to work.

Nonetheless it was reassuring to have it pointed out that I’d referred to “flying home” to Sierra Leone in a text message.

We weren’t sure how we’d feel about coming back after experiencing the relative ease of life in the UK. In the event, we were anxious to resume our lives here.

Our return echoed our whirlwind arrival. We feared it might take weeks to get permission to fly from Alder Hey but a helpful administrator made it all happen in a couple of hours late one Friday.

A little over 24 hours later we were on runway at Heathrow. And by Sunday afternoon we were enjoying bobo sam (that’s a fish) kebabs and chips on Hamilton beach.

As we turned in for the night, we congratulated ourselves on negotiating a potentially arduous journey both with relative ease and barely a cross word between us.

Two separate people even remarked on how well behaved The Flump was. (Though I do wonder whether that was sleep deprivation playing tricks on me.)

Of course, as another proverb tells us, pride comes before a fall.

Consequently, by Monday evening, a variety of supply problems left us without either power or running water. Cross words – with only the occasional hand gesture – became the main mode of communication.

Still, we’re better prepared for this sort of situation these days and simply cracked open our spare jerrycans of water for our morning ablutions.

Standing in a basin, splashing a shallow pool of cold water over yourself is a surprisingly pleasant way to bathe.

Or, at least, it would be had The One With The Common Sense not made a mockery of her monicker by leaving the soap in the water. I was left to ponder the irony of having to step into her murky run-off on the very day I wrote a scene in my novel in which a girl – finding herself “making do” wartime Britain – does much the same.

That wasn’t the wife’s only departure from her common sense last week.

Trying to get in a locked room, she rammed in a key and – when it refused to turn – resorted to brute force. Had she asked her husband, he might have pointed out it was the wrong key. Instead, not only did it shear off in the lock but the entire barrel crumbled in two.

Consequently, much of my week was spent indoors dealing with tradesmen of varying ability.

Our caretaker enlisted the help of a carpenter’s apprentice-cum-locksmith who looked all of 15. Together they used screwdrivers, pliers, a hammer, and eventually a massive crowbar to finish the job the One With The Common Sense had started by smashing the lock to bits and jemmying open the door.

Med, the teenage carpenter, then affected a repair of sorts by fitting a new lock and slapping a bit of filler around the damaged frame. The caretaker made him come back to sand and varnish but the finish was still worse than I’d manage myself.

Sadly, this is typical of the workmanship around the house but I’m past worrying about quality and aesthetics. The landlord clearly doesn’t.

For the work to be so bad is surprising. I visited Med’s workshop, where his boss was doing some impressive hand-carving to a bedhead.

Seemingly, the quality of our dining room furniture isn’t much better. When I leaned back to stretch one day, a chair collapsed beneath me. Equally, it could be a sign that I should lay off the biscuits.

Next tradesman through the door was a plumber who sorted our supply problem, only to flood the kitchen by sending water to a disconnected (broken) washing machine.

While I mopped up, he fixed a couple of dodgy toilet flushes but had to admit defeat to a couple of leaking taps – finding replacement parts seems to be the problem.

It’s difficult to complain too much when you’re paying £2.50 an hour (and we overpay), particularly when the fees are dwarfed by repairs to a London flat that’s barely covering its mortgage.

I do object to the landlord’s indifference, however. Our caretaker advises that if we want things doing swiftly and easily, it’s less hassle to pay for the work ourselves. This situation, we understand, is typical – and not helped by the fact tenants pay a year’s rent in advance.

We’re not entirely powerless, mind. We don’t leave a security bond. So I’m saving the receipts and have warned the landlord’s rep that – if at the end of the year it amounts to too much – I’ll flog his massive telly.

Speaking of which, we finally bought a DVD player so have been able to while away evenings watching my Whatever Happened To The Likely Lads box set in full HD. 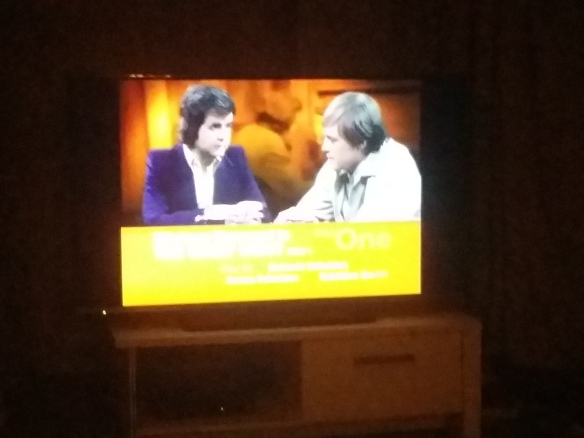 Their northern accents are a tonic for homesickness, provided I can hear them above the drumming of the heaviest rain we’ve experienced on our metal roof.

The rainy season seems to have taken grip in earnest during our absence.

We get heavy downpours every day now, sometimes accompanied by dramatic thunderstorms. There’s nearly always a welcome breeze, although they can become wild winds that wreak havoc on trees, advertisement hoardings and even buildings.

A week back in the UK has allowed us to look at Freetown with fresh eyes. It’s as though the rains have washed the city clean. They’ve left the mountainsides that hem in the city a little greener, the corrugated metal roofs brighter shades of red, blue, green or rust, and washed away the heat haze that obscured the horizon.

From the top of a steep hill, the sea looms at an improbable angle over the city.

I think I prefer this cooler, damper version of Freetown. But ask me again at the end of September when infrastructure has been subject to another few months of torrential rain.

Such conditions might not sound ideal for our first beach weekend away. However, they proved perfect.

Sunbathing isn’t our thing. And while we enjoy day trips to the beach, we never really find them that relaxing – what with the unrelenting heat and worrying about the Flump getting burned.

Bureh, as it turned out, proved a good choice for our first such trip. Our “bungalow” was pretty basic, sharing the one toilet and bucket shower with three similar huts.

“Come on, Mum. There’s a naked boy on the beach”

However, it enjoyed a fantastic position on a small headland, looking out over Maroon Island to the left and following the curve of Bureh Beach to the right.

Bureh is a magnet for surfers and, consequently, has a younger and more laid-back vibe than beaches further north. Having a base to dump our stuff while we headed into the water made for a much more relaxing experience.

So it was easy to pass time splashing about in Crocodile River, which flows through the beach at low tide, tumbling in waves with the surfers or watching the Flump play with the local kids. (Inevitably making a beeline for the little naked boy.)

Intermittent cloud cover meant we could spend longer away from shade, and The Flump got her wish to plunge into the sea at every available opportunity. 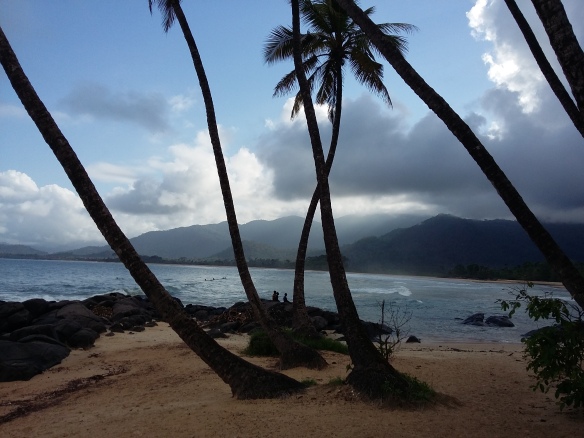 The guesthouse food was excellent and after dinner we could lounge around sipping wine and watching the sun go down, before starting on the beer and the inevitable alcohol-fuelled barney.

We didn’t get around to surfing but both managed to squeeze in a barefoot run along the beach, so reckon we can engineer the time on another visit.

We definitely plan to return. There seems a bit more hope for Bureh than some places. The village clearly has a lot of poverty and seems to have had its running water cut off, meaning a long journey for supplies.

But Western tourism did appear to be having a positive impact on locals rather than benefiting wealthy foreign investors. More of the businesses seemed to be run by Sierra Leoneans and the lack of hard-sell from tradesman suggested they were doing okay. I hope that’s the case.

As we rolled back into Freetown, marvelling at returning to a house with all utilities in order, we were left wondering what the next little challenge would be.

Sure enough, my car dashboard did a passable impression of Blackpool Illuminations in warning lights the next morning.

So I’ll look forward to dealing with a mechanic.