As we look forward to a (scheduled) trip home, it seems fitting we should end our first spell in Sierra Leone with a glitch.

When we tried to book our boat transfer to the airport, the puzzled boatman said there was no flight on Wednesday.

Royal Air Maroc’s website had definitely given us the option of flying that day. And the date on the ticket proved it. However, when we called the airline to check, it confirmed that no such flight existed.

So, we’ll be travelling a day later than planned at a time when we’re unusually keen to get home.

Of all possible causes of homesickness, politics was the last thing I thought would make me want to dig out my EU passport and jump on the first available flight to London.

But an aspect of expat life I never anticipated was the sorry spectacle of my country making a global embarrassment of itself. (Barring the football, of course, where it’s customary.)

Despite long predicting it, I was still winded by the result of the UK’s referendum on European Union membership. Mostly I was just sad. I like being an EU citizen and enjoy the benefits it brings.

But the campaign, dominated by lies, overexaggerated scare stories and Machiavellianism, was shameful. And that was before the all-party Parliamentary backstabbing fiesta got under way.

I saw no shame in voting Leave. There are plenty of fair enough reasons to pull out of an unwieldy organisation that ignores a sizeable proportion of its dissenting citizens.

And I rather suspect that things will all get sorted out so that – 15 years down the road – our “independence” won’t make a huge amount of difference either way.

However, it did rather feel like life’s optimists had lost out to those keener to see the bad in things.

If they weren’t too busy scraping a living to listen to Leave campaigners on the World Service, folk in the shanty homes down the road might have wondered how things could be so miserable living under the world’s fifth largest economy.

Perhaps that’s an unfair assessment. However, from where I’m standing, the focus on immigration – and tendency to hark back, rather than look forward – has given the impression of an inward-looking, xenophobic and mean-spirited country.

That patently isn’t accurate. I write from a developing country in receipt of more aid from the UK (about £75m this year) than any other nation. And that’s without taking into account Britons’ personal charitable donations.

But attitudes to foreigners living in Britain – even refugees fleeing a common enemy – have long been hardening, thanks in part to cowardly politicians.

Labour sidestepped genuine concerns about immigration, instead promising “British jobs for British workers”. Then David Cameron fanned the flames with his pledge to “tackle” immigration. Both knew they couldn’t keep their word from within the EU.

Few politicians were brave enough to point out immigration’s benefits, or challenge the view that foreigners “take our jobs”, and little was done to relieve pressures on housing or health services when the population rose.

So the angst is unsurprising. But the suggestion the poll has in some way legitimised racism is worrying, particularly when backed up by police hate crime figures (albeit over a very short period).

Watching from afar, it’s hard not to be ashamed of the image the UK is projecting. I wonder if people back home realise how unseemly it appears. I fear a fair number don’t care.

It’s particularly upsetting because it’s at odds with the Britain I know: a generous, welcoming and fun place to be, with beautiful countryside and great cities, even if we do love a grumble.

I’ve never wanted to live anywhere else. Now, I’m desperate go back to figure out whether that’s still the case.

Kicked when down: At the end of a tough fortnight, they did this to my favourite bar

I’ve found it difficult not to let that gloomy backdrop colour a difficult last fortnight in Sierra Leone ahead of a six-week return to the UK and Ireland.

A little over a month ago, we felt fully immersed in life. Now it seems things are winding down as the rainy season takes hold.

Every morning the streets are strewn with a fresh slew of rubble, washed down from the hillsides. Shops open late as their owners clear up afresh, while the beaches are coated with seaweed churned up from the deep.

My writing work, which had been progressing apace, stalled as term-time ended at The Flump’s nursery.

It’s a shame because it’s been great for us. It has such a warm atmosphere and I love picking her up during the post-naptime calm.

Once I turned up early to find The Flump lying fast asleep on top of a snoozing assistant; just lovely.

The staff seem to find her cheek and single-mindedness a whole lot more fun than her parents do.

Not that her exuberance was in evidence at the end-of-term “performance and awards” extravanganza:

Parents were encouraged to bring food to share and our Chinese veggie stir-fry seemed embarrassingly bland in comparison with the typically chilli-laden African alternatives. Not that we got much of a look in, what with the nannies hogging the savouries and the kids demolishing the pizza and assorted fat-laden snacks.

Diet is one area where our Salonean nursery proves tricky. Unlike in London, where organic meals and healthy carrot sticks with hummus are included in the eye-watering fees, we have to provide our own pack-up.

Leftovers take care of lunch but The Flump repeatedly eschews our snacks of bananas, rice cakes and crackers in favour of light-fingering her classmates’ treats.

“You need to give her more food,” I was told once. “She likes Pringles and biscuits.”

When this gargantuan appetite disappeared last week, we knew something was up. And when it was followed by a bad case of the trots, we headed straight to the clinic.

The One With the Common Sense and I are surprisingly relaxed parents, given our propensity for flare-ups. However, we were both rattled as poor Flumpo’s insides caused her obvious distress during two nights under observation.

As it turned out, she’d been playing host to an intestinal worm which, while not particularly dangerous, can grow alarmingly to the size of an earthworm. 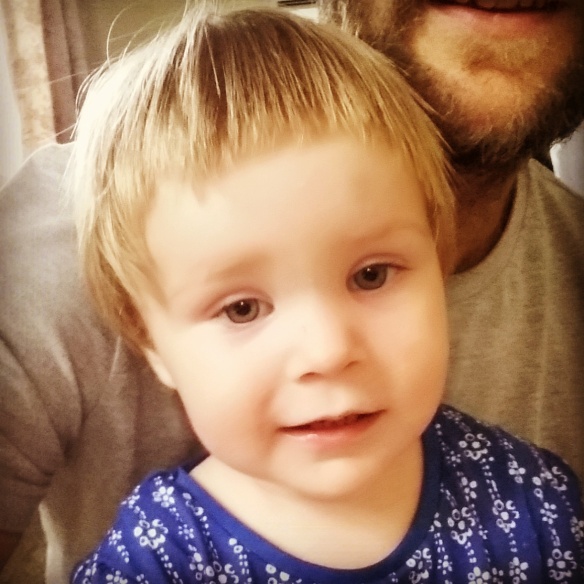 Since she was treated, we’ve spent longer than is healthy staring into nappies in search of its remains.

Again, we appreciated our fortune in having good medical insurance.

This week, one of our watchmen introduced us to his sturdy young son (name pending, at age four weeks). It set us thinking about the sort of start he’d have in life, without the privileges The Flump enjoys.

We make sure his dad earns more than most for the job but – once living expenses are taken care of – I can’t imagine he’ll have much left to stock up on Calpol.

I spoke to our doctor about the kind of things it might be useful for us to bring back and she confirmed that medicines are not only expensive but, shockingly, often “made for Africa” – in other words sub-standard.

So, we’ll stuff whatever we can into a case and hope the little fella never needs it.

Like most of our neighbours, both of our watchman have been fasting for Ramadan. The annual fast is a feat of self-discipline that puts my paltry annual Lenten promises into perspective.

Officially 60% of the population here is Muslim, although Freetown is home to a large proportion of the country’s Christians (30%).

From my limited experience, people are respectful of each other’s faiths, and some customs – such as the tradition of following up funerals by marking deaths again after 40 days – seem to be shared.

For all its problems, and remarkably given it’s just 14 years since civil war ended, it seems Sierra Leone could teach the world a lesson in peaceful cohabitation.We can only hope it stays that way.

I’m told the need to wake at 4.30am to eat before dawn makes observing Ramadan as much a challenge of fighting fatigue as hunger, particularly for parents of young kids who wake frequently.

It’s certainly no fit with the life of a writer. I can’t make it through a morning at the keyboard without cracking open the biscuit tin.

Not that I do that with the Flump at home. She’s throwing herself to the floor, legs kicking, in rage over too many other things without throwing biscuits into the equation.

One such bone of contention is the DVD player. Having been starved of TV for three months, she throws tantrums whenever the telly is turned off. There are times I’m thankful for the blackouts.

That said, Dora the Explorer has proved a vital distraction when trying to get antimalarials down her. She’d taken them ground into a teaspoon of honey, without fuss, for months.

But we made the fatal error of trying the same trick to disguise the sickly taste of another medicine and it seems to have put her off honey for life. For three weeks we mashed pills into banana, yoghurt, jam, porridge and maple syrup, with varying degrees of failure.

We were about to reach for the chocolate spread when I thought I might as well give it a go with plain bran flakes. Sure enough she took it without complaint and has done ever since; it must have been the sweet stuff putting her off.

Meanwhile, relations between The Flump and I have been fractious at best over the last fortnight, since she finally realised that Daddy’s stern voice wasn’t a cue for hilarity.

One telling off for throwing toys resulted in a half-day stand-off, during which she refused her mother’s demands to say “sorry”, and was in return denied cuddles.

I’m happy to report that she cracked first, though I was left mulling what a chip off the old block she is. (As to which block, I’ll let those who know both myself and missus decide.)

Anyway, Flumpo had the last laugh after I went for a long overdue haircut and beard trim. She wouldn’t come near this clean-cut imposter for days until one morning she woke me with a scratch of the chin and decided normal scruffy Daddy was on his way back.

After a trying couple of weeks, our last weekend here came as sweet relief.

A relaxing Saturday evening stroll along Lumley Beach, cooled by a fresh wind, was followed by a day down the coast at Lakka. The cloud cover meant the Flump could have a ball with the local kids for as long as she liked, while we caught up with our favourite beach bar hosts.

It reminded us that – despite our eagerness to get home – we have plenty to look forward to when we get back.