I hate to be one of those irritating people who go on about amazing far-flung beaches while you’re pondering turning on the central heating.

But our last few beach outings really have been fantastic fun.

As the rain has eased, so has the flow of litter into the drains and on to the sea. The last seaweed bloom that left the sands covered in a festering mass seems to have finally cleared.

And at Lakka on Sunday the water was clear and perfect for bathing, to the point where I had what’s probably my first ever proper swim in the sea – covering about 500m aided only by the salt offering great buoyancy.

Suddenly my daydreaming about triathlons doesn’t seem so unrealistic.

Still, I’m no match for the energy of the Flump. She has an insatiable appetite for “swimming”, by which she means being carried out until Daddy’s is neck-deep and then trying to wriggle out of his arms yelling: “Big wave. BIG WAVE!!!”

But one potential method of drowning went out of the window in favour of another when Santigi, a young lad we chat to regularly, produced a surfboard. (Quite from where I’m not sure; it was pretty weatherworn so I wonder if it washed up at Lakka after being lost down the coast at the surf spot of Bureh.) 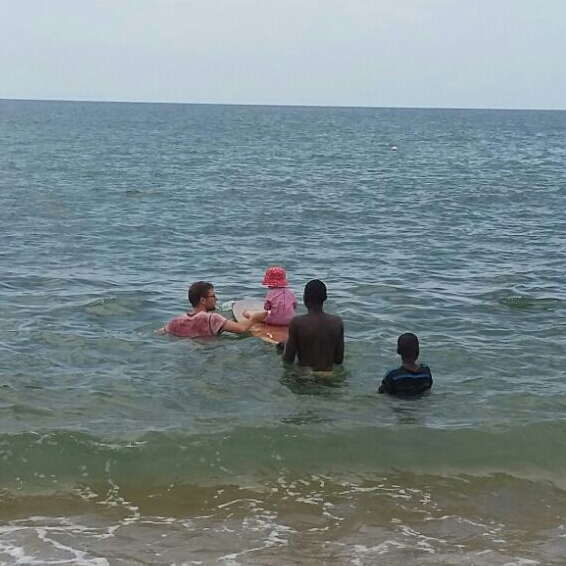 He plucked the Flump from my arms and sat her on the board. I at least acted the part of concerned dad by swimming over and bobbing alongside, despite knowing full well that Santigi is more likely to rescue me than I am the Flump. He swims like a teenage Merman.

It turns out that Flumpo is about as at home on a surfboard – or “boat”, as she called it – as I’m all at sea on one.

With the local kids holding the back for balance, she shoved my hand away as I tried to steady her, before trying all manner of positions: chest down, side-saddle and even trying to stand at one point.

When our friend’s seven-year-old daughter climbed on to join her, Flumpo copied her straddling the board and looked for all the world like a natural-born surf chick.

With a gentle push, the lads sent her riding home as a wave tumbled onto the beach. She slid off, blew the water out of her face, turned and pointed: “The boat, the boat, THE BOOAAT.”

Overcast skies at the beach are fine by me

I was never that confident in water so I’m delighted she’s taken to it so well. However, I’m a bit concerned about how we’re going to limit her time splashing around when the sun really starts beating down.

It’s fine for now. Overcast skies mean its not too hot and while you still have to slather on the factor 50, the sun is neither so relentless nor fierce as it was back in April or May.

We’re still having some fairly spectacular spells of rainfall, often with the sort of earth-shaking thunderclaps that have the Flump leaping into our arms. (I’m not sure whether she’s more afraid of the thunder or the sound of her Dad’s knees knocking.)

Either way, it definitely feels like the seasons are changing.

Only a couple of weeks ago I was still noticing new vistas of mountainside looming over city on routes I’d driven countless times.

But the vivid blues, greens and oranges of sea, foliage and earth are starting to fade once again into the heat haze.

Our clothes are drying in a day and even short walks around the shops can leave me spent by mid-afternoon.

The humidity is as oppressive as ever. Even after a cold shower and copious quantities of talc, I can still be sweating off a short morning run an hour later. I’ll be honest, I’d prefer a chilly autumn day in Blighty any time.

Still, I’ve been enjoying running recently and feel stronger even if I’m not getting any quicker.

My championing of Everton Sierra Leone means I get the occasional high-five and shout of “Eva-tor-nyan” as I run along the beach, which always puts a spring in my step.

There’s a genuinely supportive atmosphere towards runners here, and you’ll often hear a cry of “nice wok” or “good exar-size” as you pass.

I don’t seem to attract the “hey, baby” or “I love you” shouts that the One With The Common Sense occasionally receives. (She claims not to return them with the thumbs-up she offers in response to “key-pee-tup”.)

“ARGH, WHITE MAN!” is the strangest response my appearance has elicited, when I hopped up onto a drainage channel directly behind an unsuspecting schoolgirl the other day. She didn’t bear a grudge, however, and I was soon receiving the usual children’s chorus of “hello” from her and her mates friends.

I have no problem with the cheerful cries of “Oporto” – Temne for “white man” – that I sometimes receive from these kids. It’s born out of curiosity.

However, I hate being called “White Boy” in the street. It only ever comes from strangers – usually cocky young men – and while it’s not exactly malicious, you can tell by the tone that it’s not complimentary either.

I’m used to people using that fact that I’m from Liverpool as an excuse to crack jokes (some of them are even funny) or do the worst accent since Adrian from Bread. But that’s almost universally meant in good humour.

While it’s not truly comparable to a Sierra Leonean having an N-word tossed his way in London, I feel I understand a little better how that must feel.

The thing is, though, I’m in the privileged section of society here. While I might get irritated, I’m not likely to get persecuted. And I won’t suffer the sort of unspoken racism that members of minority groups in the UK might, save – of course – for paying over-the-odds while shopping.

Speaking of which, we were quoted Le200,000 (£25) for an iced sponge cake the other day ahead of celebrations for Flumpo’s second birthday.

The Flump and I had a taste of what that can buy you when one mum brought an enormous cake to nursery on her daughter’s birthday this week. I dread to think how much it cost but we have heard of people spending more than the equivalent of £50.

It was tasty enough – and not too sweet – but despite washing it down with pouches of Kool Aid, the kids were surprisingly subdued. Presumably they all went as mental as the Flump did at home, once the sugar had kicked in.

Some kids’ parties here can be amazingly lavish, if they’re from a wealthy family. Scores of people – young and old – attend, while party bags feature better booty than our child will be getting as presents.

Our little gathering, with members of our Thursday parents group, won’t quite match these standards.

Rather than splashing out on a cake, we’ll improvise at home with some Betty Crocker’s mix and our lasagne tray, then hope for the best. (Bake Off fans need not judge, we’ve no weighing scales here.)

We’ve already warned people not to bring gifts in case they make us look bad. We packed a gift or two from home but it’s a pretty paltry selection.

We’re hunting for presents – preferably a little plastic bike-type contraption – but the second-hand ones on sale are either too big or too small. And new ones are going for $250 a piece, so they can stay on the shelf.

Whatever the Flump ends up with, I’m sure she’ll enjoy it more than the gift Father Christmas brought her: a meningitis B inoculation.

1 thought on “Times they are a-changing”