It’s fair to say the Flump probably won’t have another birthday quite like her second one.

She didn’t get much in the way of presents from her parents but at least they both made it to her party, which was by no means certain at one stage.

Despite our best efforts, we didn’t find a suitable/suitably priced bike/scooter/trike contraption.

Everything was either too big or too small, with the exception of this rusting gem – a snip at £20. 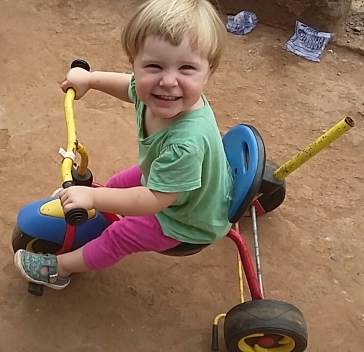 However, the unexplained pole protruding at eye level from the back caused its purchase to be vetoed by the One With The Common Sense.

So Flumpo had to make do with a book and DVD from Mummy and Daddy.

These were supplemented by more of the same from her aunty who sent over what turned out to be the showpiece gift in the form of a giggling, farting Minion that initially struck terror into the birthday girl.

Party prep had begun the night before when The One With The Common Sense worked wonders with a little shop-bought cake mix and a lot of guesswork over measuring and oven temperature.

The result was two things that looked, smelled and had the consistency of real cakes, despite the “imitation carrot flavored pieces” (sic). Betty Crocker has some marketing team, making a virtue of having “natural and artificial flavours”.

I huffed and puffed at a packet of ancient balloons that kept exploding in my face. And we spent a pleasant morning treating the Flump to pancakes, presents and then pies at the beach (no buns this weekend, what with all the cake).

We’d stocked up on party essentials – paper plates and cups, booze, icing sugar for the cake, diesel for the generator etc – and were heading home when the car ground to a halt.

It had been sounding a bit off and I was planning on getting it serviced. But that didn’t come soon enough to stop its electrics shutting down on one of the area’s busiest roads.

This wasn’t ideal, a couple of hours before hosting a party. However, there were silver linings. For a start, an empty taxi passed by within a minute to take wife, Flump, shopping and diesel home.

I got to use my emergency triangle, which made me feel like a responsible adult, and our mechanic, Mr Koroma, came straight away.

I waited for him in the shade of a tree and was surprised how neatly the traffic negotiated my stricken vehicle. This despite the intervention of a bedraggled Rastafarian who sat on the kerb opposite, stretched out his legs and rolled an enormous joint.

It took an awful lot of beeping and gesticulation to get him to shift. Half the drivers thought it was hilarious.

Thankfully, Mr Koroma patched up the car well enough to get me home in time to decorate the cake, tape balloons to chairs, and shower.

This was our first experience of a toddler party but never let it be said we don’t know how to throw a good bash. Our guests were treated to a cocktail of unhealthy snacks, pineapple chunks and some enormously fat breadsticks, which tasted only marginally worse than the dodgy white wine we served.

Still, there was always Star beer and cake, the latter quickly firing up Flumpo’s friends to the point they were doing laps of the house while our daughter provided a ear-splitting sonic backdrop.

By this point, I’d given up trying to maintain any pretence of being in control and was swilling back the Star in acceptance of defeat.

It was a nice day, even if the Flump was oblivious to what it was all in aid of. Several of our Thursday Parents Club came along – a few troopers arriving direct from previous kids’ parties – and we squeezed some civilised conversation in between the mayhem.

We’d been waiting for the car to break down mid-journey. It seemed a long time since we’d been struck by calamity. But then perhaps we’ve just grown used to things not working properly.

As I type, the lights keep going on and off. Not in a disco style, but about once every 25 minutes they’ll suddenly black out for a minute or two. Aside from a token “oh, no” from the Flump as we resorted to torchlight for her last bedtime story, we’ve just carried on as though nothing’s happened.

This problem seems only to affect us. Our watchman Ibrahim, who’s studying to be an electrician, reckons the fault is with the pole that supplies our house from next door’s yard. However, the ever-skeptical One With The Common Sense suspects someone’s tapping our supply.

Our landlord’s right-hand man called someone from the electricity board out but he arrived without a ladder – obviously – and so went away again. He’s not been seen since.

It’s not causing us too much trouble as it only seems to happen after heavy rain. Speaking of which, the wet season isn’t going without a fight. It chucked down with a force I’m not sure I’ve experienced before the other night, a wind blowing the rain horizontally through the gaps in our bedroom window frame and leaving us a morning mopping-up job.

Meanwhile, the storm whipped up a bigger-than-ever dump of seaweed and left the stuff piled in great mounds at one end of Lumley Beach.

The atmosphere gets ever stickier, which hasn’t made a hectic week any easier. The One With the Common Sense has been working 13-hour days ahead of a funding application deadline, while I’ve been doing long days on some “proper” work – pro-bono – for a charity.

Its PR team sent me to Kambia, close to Sierra Leone’s northern border with Guinea, to interview workers who buried the bodies of Ebola victims.

I’ll write more about those remarkable folk in due course but arriving in Kambia certainly gave me an idea of the conditions they worked in.

While I was expecting a sizeable town, it didn’t amount to much more than one large hairpin of road and I’ve since learned there are only about 270,000 people in a district the size of Derbyshire. Much of it is accessible only on rutted dirt tracks, or even on foot.

I liked the old town’s neat layout and relaxed atmosphere, although the scars of civil war were still visible in the shattered shells of once-smart homes.

I enjoyed a toddler-free night in Kambia’s tree-shaded “Africana village”, where my chalet had a blissfully firm bed and the sort of grungy bathroom you hop in and out of quickly.

While my reportage is rusty, double-checking broken English gave my shorthand a chance to catch up. I was embarrassed, however, when my camera batteries suddenly died – particularly given I’d been snapping birds a little earlier.

The trip was memorable for including the only time – thus far – I’ve been slapped mid-interview, when my colleague Dennis put paid to a mosquito who’d been feasting on my arm.

I’m sorry to say that such a busy week hasn’t aided preparations for the One With The Common Sense’s birthday. There’s a danger she’ll fare even worse than the Flump.

She’s already endured one disappointment this week, when some neighbours we’ve grown fond of moved away.

The guys across the road had never been short of a smile, a joke or a chat about the football results, and always made a fuss of the Flump.

We helped them out during occasional water supply problems and their friendship with our watchmen helped create a reassuringly neighbourly atmosphere.

So we were sad to see them move on, although it’s great for them to have a new family-owned place.

One photo opportunity I’ve long regretted missing was when I pulled up at our drive, looked through their always half-open gate, and saw four of them smiling and waving as they shelled peanuts. It was such a natural, friendly scene.

I didn’t think I’d see them together again, so was delighted when we went out to offer birthday cake around and saw most of the little gang there.

They didn’t take too much persuading to pose and I’ll treasure the resulting picture. It’s not one of the usual scenes showing an idyllic beach, flooded slum or village clinic. Rather it’s a snapshot of the real Sierra Leone – simply showing friends hanging out at home.

Oh, and the little white girl who lives across the road.