I must own at least a dozen guide books to various countries, continents or regions but – daft as it might sound – I’d never read one before we moved to Sierra Leone.

I’d obviously flicked through them, looked at the photos, pored over sections and sought their advice. But I’d never properly read one.

Those sections on history and culture – even the bits on general detail about a city or region I was visiting – would leave me cold. Beyond plotting out a rough idea of a trip, I found them difficult to digest until I was actually in a place, and even then I tended to use them more for quick references to accommodation, restaurants, districts or specific sights. 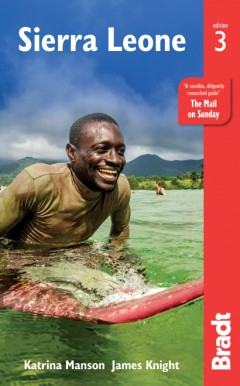 That changed when we moved to Freetown. I suppose spending any great length of time in a place is going to change the way you read about it. But little did I know how much value I’d get out of our Bradt guide to Sierra Leone.

While settling in, I’d reach for the Bradt to quickly look up some bit of info, only to put it down 40 minutes later having found myself engrossed. Despite it being densely packed with information, it was such an easy read.

So I was really keen to see how the third edition, published in January, would build on the strengths of its predecessor.

It’s been great to see the result; not just because the updater, Sean Connolly, both acted on my suggestion to include a short section for expats and asked me to write it.

The beauty of Bradt’s Sierra Leone is that the personality of the original authors – the journalists Katrina Manson and James Knight – leaps out from the page. Whether describing the taste of cassava bread, Freetown’s ramshackle Krio stilt houses or the pitfalls of photography etiquette, they do it with a light touch that makes for easy reading. And by illuminating their thorough research with anecdotes, they convey the truly fun and fascinating experience that is visiting Salone.

The first edition was published in 2009, and we arrived seven years later armed with the 2012 update. That pre-dated the Ebola crisis that swept the country to the detriment not just of its people but many of the businesses and services mentioned in the guide.

The outbreak – which infected 14,124 Sierra Leoneans, killing 3,956 of them – is duly recorded in an updated history of the country. And, whether via mention of the ‘Ebola Cemetery’ at Waterloo, outside Freetown, or the effects on businesses or charities, the story of the epidemic permeates this edition.

Ebola: A ‘distressing but fading memory’

There’s also a section on how the disease affected women and children in particular – more than 12,000 kids lost their primary caregiver – and continues to affect survivors through stigmatisation. However, as this guide notes: “Today, Ebola is, for most Sierra Leoneans, a distressing but fading memory.”

Similarly, the passage of time since that other great scar on the nation – its decade-long civil war – is reflected through a subtle tweak to the format. While that conflict has undoubtedly shaped the country and its citizens, today’s Sierra Leone is about as peaceful a place as I’ve ever been. So it’s fitting that Bradt has moved its natural history and conservation section – more relevant to travellers than the child soldiers of popular imagination – ahead of its valiant attempt to sum up the background to a civil war that no amount of research could adequately explain.

Life can change a lot in six years and the appearance of tuktuks on Freetown’s streets is noted, along with the advent of mobile money – something we’d have found handy. The updater has done his best to keep pace with Freetown’s ever-changing retail and hospitality scene, and I’m delighted to see Gina’s cafe and The Hub hotel – oases of calm where much of this blog was penned – included in the listings.

Sierra Leone isn’t historically known for the accuracy of its cartography. However, as the book points out, a “curious knock-on effect of the Ebola crisis” was a dramatic improvement in mapping nationwide, as aid agencies gathered data to lead them to even the tiniest communities. The results are available at Open Street Maps and the improvement is reflected in Bradt’s own maps, which are far clearer than in previous editions.

For me, the most pleasing aspect of this new edition is the attention to detail. Inaccuracies on an oversimplified map of Kabala that had us wandering round in circles have been corrected, along with the an erroneous description of a 90-minute walk en route to Mount Bintumani that took us four long, hot and sweaty hours.

If I have one criticism, it is that I occasionally find the book harder to navigate than other guides. I spent almost as much time looking for the reference to the British Council building in Freetown as I did trying to navigate the city’s streets to find my way there. But that perhaps is the trade-off for making a guide so readable.

Reviewing Bradt’s Sierra Leone has brought back so many happy memories for me; not just of life in West Africa, but of sitting in the oppressive heat of our living room poring over the pages of the guide – my trusted friend – trying to figure out how life in my new home was supposed to work.

And reading one line in the latest edition brought me special pleasure. The listing for our favourite beach bar, Tommy’s Paradise in Lakka, mentions “by some accounts the best fish & chips on the peninsula”. And having sampled my fair share, I’ll stand by that statement.

Verdict: Detailed, essential and fun – the most readable guidebook I’ve ever opened.